A story of Miss Helen Keller and the Akitas that loved her….

The first Akita in the United States, was brought here by the renowned Helen Keller. In 1937 Ms. Keller and her companion, Ms. Polly Thomson embarked on an extended speaking tour taking them throughout much of Japan.

Ms. Keller was most highly revered by the Japanese people often being referred to as “Saint Keller…Saint of Three burdens…Miracle Saint…Miracle Hands…Great Heart of Love…Light of All Miracles…Sacred Light”. No foreign visitor had ever been met with such enthusiastic reception. 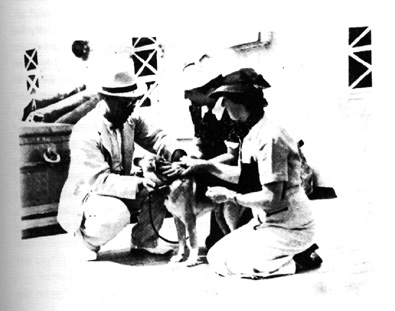 Included in Miss Kellers plans of regions to visit was the Akita district, she had learned of the legend of Hachi-Ko an Akita so revered by the Japanese people for his immense loyalty to his master that a bronze statue bearing the inscription of his story, graces that special place at Shibuya Station where he waited those many years for his master. Miss Keller loved large dogs and was very impressed with the Akita’s faithfulness. When she expressed the desire to meet (have) an Akita, action began to arrange for her to do so. A young Akita Police Department instructor, Master in the art of Kendo, Mr. Ichiro Ogasawara, who owned Akita dogs, was asked to arrange for Ms. Keller to get one.

Soon after having arranged for an adult dog to be taken to her, he learned it was not appropriate for her needs, so he decided his own new puppy, “Kamikaze-Go”, should be introduced to her. Miss Keller was so enchanted by this little goma colored puppy that with the agreement of his family, Mr. Ogasawara decided to make mikaze-Go a gift to Saint Keller and a formal presentation took place on June 14th, 1937, the pup then just 75 days old.

Miss Keller continued her lecturing tour knowing an Akita puppy awaited her. In early July fighting broke out between China and Japan escalating to full scale war near the end of the month, Miss Keller’s plans to visit China were cancelled and her tour cut short. On August 12, Ichiro Ogasawara himself presented Kamikaze-Go to Miss Keller on board the ship Chichibu Maru (named in honor of the Emperor’s brother), he had traveled down from Akita City to fulfill this honor.

Miss Keller later wrote of this moment: “His devoted master left him by my side, and I sensed it was with a wrench of his heart that he turned and went to shore. The puppy pathetically sniffed around the deck for the familiar footsteps. As the ship surged into a world he did not know, he transferred his trustful loyalty to me, and such a compliment from an Akita dog made me bow my head in humility.”

“Kami” as he was soon nicknamed, shared Miss Keller’s stateroom on the journey and he quickly became the attention of all the passengers who showered him with attention. During the sixteen days of crossing a profound devotion developed between the two, Kami showed a special sensitivity to Miss Keller’s emotions as she related: “If I cried from loneliness for my beloved teacher, he would put his big paw on my knee and press his cool nose against my cheek and lick away the tears.” Miss Keller’s beloved teacher, Ann Sullivan, had died in October the year before.

Tragically, Miss Keller lost little “Kami” at the young age of 7 1/2 months to distemper. Her grief was so deep, in devastation she cried “….another joy has gone out of my life.” She wrote Mr. Ogasawara, in part: “If ever there was an angel in fur, it was Kamikaze. I know I shall never feel quite the same tenderness for any other pet…….”

Later, once again Mr. Ogasawara provided a special Akita for Miss Keller, this one was to be the beautiful golden red litter brother to Kamikaze named “Kenzan-Go”, he was over 24 inches tall and about 100 pounds.

Kenzan-Go was an “official gift of the Japanese Government” and it wasn’t until after Kenzan-Go’s arrival to a Brooklyn pier on the 1st day of July, 1939, as she departed to greet him, that Miss Keller learned of Ichiro Ogasawara’s gracious donation and of Kenzan-Go’s relation to her precious “Kami”. Miss Keller and Miss Thomson waited anxiously on the pier from midnight till midday for the precious cargo to be unloaded. The magnificent Akita came to her side, there to remain, as he knew it was for her he had journeyed.

Miss Keller often affectionately referred to him as “Go-Go”. Kenzan-Go settled in nicely to his new home with Miss Keller in Connecticut, he would move easily amongst her prized treasures from Japan, from jade carvings, elegant vases, objects of ivory and porcelain to beautiful rosewood and teak furniture, never even brushing against them. 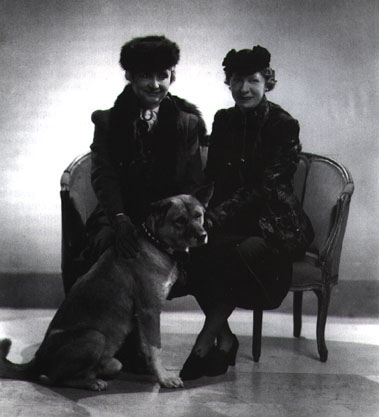 Out of doors Go-Go would track fox or deer in the snow or break the ice in the brook with his paw to drink the cold water. In a letter to Mr. Ogasawara Miss Keller wrote: “a splendid protector and companion, and a precious part of my daily life”. She spoke of him as “all golden in the sun”, “his tail waving like a pine bough in the breeze.” She also wrote of his outdoor romps: “but he always came back telling me with his nose, ear and tail to play with him.”

Kenzan-Go loved, protected and delighted Miss Keller every day of his life as had his littermate the precious “KamiKaze-Go”, Akita brothers who shared a very special mission, to give the treasured joy of themselves to a most “special lady”.