Beloved by all who hear his story “Hachi-ko” has truly touched the hearts of people around the world.

His legend lives on larger than life.

Daily Professor Eizaburo Ueno walked to Shibuya Station to board the train to Tokyo, accompanied by his Akita named Hachi. Once there Hachi-ko (as the professor affectionately called him) remained behind as the professor boarded the train for the commute to Tokyo Imperial University.

Hachi-ko would greet his master precisely at 3 p.m. as he returned on the afternoon train. One day Hachi-ko waited patiently as he did every other day, but his master was not on the train.
Tragically, Professor Ueno had died suddenly at the University that day having suffered a stroke. Hachi-Ko waited long into the night, friends of the professor come for him, sending him to a new home some miles away. But Hachi-ko would continually run away to return to his former home with the professor he would then go to the station to again keep vigil.

Hachiko continued to meet the 3:00 train every day, hoping his beloved master, to whom he was so devoted, would return. The former gardner of the professor, Kikuzaboro Kobayashi, fed and cared for Hachi-Ko but allowed him to mourn his own way. The station Director, realizing why the dog returned each day, also gave him shelter from the weather and began to feed him as did many people so moved by his faithfulness. Hachi-ko became a landmark; his unaltering routine became well known to communters, his fame spreading nationwide. Japanese schoolbooks talk of his great love for his master, serving as an example of loyalty. He was both pitied and admired. Many people traveled to Shibuya Station for the express purposed of seeing Hachi-ko, often presenting him with food, gently touching his head for luck.

Hachi-ko continued his daily ritual even when arthritis and age slowed his pace. Almost ten years after his beloved master, Hachi-ko was found dead on the very spot at the station where he had kept vigil for so many years. A day of mourning was declared. He was almost 12 1/2 years of age when he died on March 8th, 1935 having been born October 4th, 1922. The little creme colored puppy had been a gift to the professor from one of his students at the University. 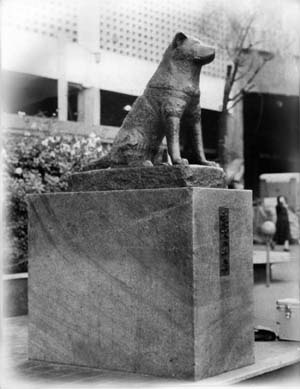